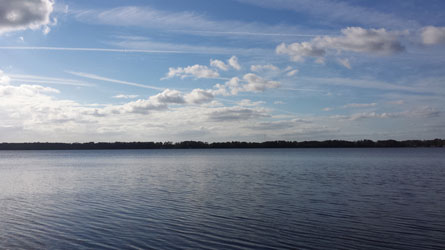 Lake Hampton, also known as Hampton Lake, is in southern Bradford County near the intersection of State Roads 200 and 221 (US 301 and CR 18, respectively). The lake is approximately 823 acres in surface area, with a median water surface elevation of 128.51 feet (ft) above the North American Vertical Datum of 1988 (NAVD88). The lake has a mean depth of approximately 12 ft.

The lake drains directly to the Santa Fe River through a man-made canal in the lake’s southwest corner. The Santa Fe River is coincident with the County line located south of the lake and west of US 301. Available aerial imagery indicates that the outfall canal was constructed prior to photographic history (before 1938). Topographic information suggests that the lake drained to the east through what is currently the US 301 corridor. This eastern route has been eliminated by highway construction; and its function has been replaced by the canal, which may have increased flows from the lake to the Santa Fe River compared to pre-canal conditions.

The lake watershed covers approximately 4,456.6 acres. Most of the land use in the watershed is upland forests (40.1%), followed by wetlands (17.9%) and waters (17.6%). Agricultural and range land comprise 10.8% of the watershed; while developed areas, including transportation and urban land use, comprise a total of 12.6%. The lake is not designated as impaired under the Impaired Waters Rule (Chapter 62-303, F.A.C.).

The District voluntarily submits to independent scientific peer review for all MFLs established. This practice ensures that the highest degree of scientific certainty is provided prior to adopting an MFL by rule.

The final technical reports and peer review document for the Lake Hampton MFL are available for download: 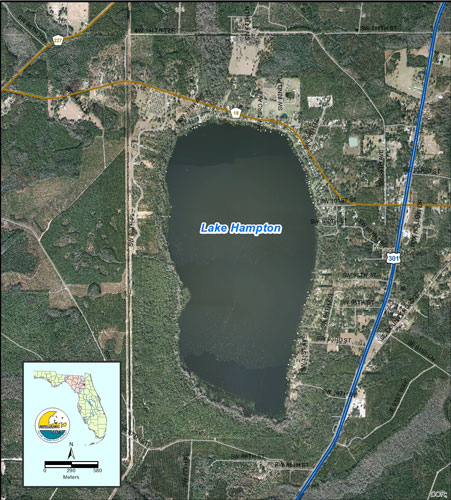