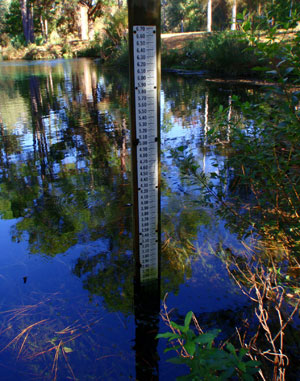 The stage (or level) of a spring is the elevation (or height) of the water surface, either in the spring pool or the spring run. This is commonly measured in feet above mean sea level (MSL) and is determined by referencing a datum. Two datums that are widely used across the United States are the National Geodetic Vertical Datum of 1929 (NGVD29) and the North American Vertical Datum of 1988 (NAVD88).

These two reference points are used to represent "0" elevation or what most people call "sealevel". The sea itself cannot be used because water is fluid and not consistently in the same place. The surface of the sea is constantly changing due to the changing position of the moon (tides), wind, currents, temperature, and other factors. A datum gives us a constant single point from which all measurements of elevation can be compared. The newer NAVD88 datum is more accurate and the one most in use today. The District has converted the reference points for all monitoring stations over to the NAVD88 datum to allow the levels to be compared on the same vertical scale as other, nearby water bodies.