Providing more accurate river level information is important to the citizens in the Suwannee River Water Management District (District), especially those who own property along the rivers of the District that are affected by periodic flooding. One part of providing more accurate river levels is upgrading to the newest vertical datum (North American Vertical Datum of 1988 - NAVD 88) in August 2015.

The new vertical datum will affect river level values on the following rivers: 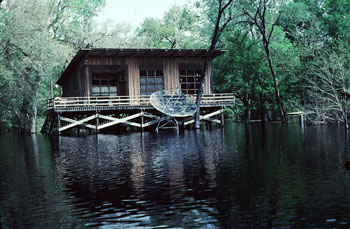 What is a Datum? 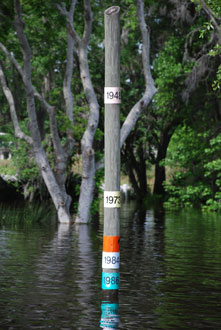 A datum is a standard or reference by which things are mapped from either horizontally or vertically. Using the same datum, a surveyor may relate and compare positions or elevations of various stations. Horizontal datums are used to establish specific locations on the earth. Latitudes and longitudes are one coordinate system used to provide these locations. By using the same vertical datum on surveys, a surveyor is able to provide an elevation for a location and this elevation can be compared with other elevations at different locations.

For example, the District uses horizontal and vertical datums to establish the locations and the elevations of each river level station. When a surveyor provides a vertical survey for constructing a home near the river, the new homeowner can compare his elevation to the elevation of the river at the nearest river level measurement station. Using this relationship, the homeowner can estimate when floodwaters may impact his home, property or even the prevent access to his home.

All river level stations in the District have been using the vertical datum referred to as the National Geodetic Vertical Datum of 1929 (NGVD 29).

NAVD 88 was developed to improve the accuracy of a reference point for vertical measurements. It is a result of years of new leveling, newer technology and addressing other factors that affect the accuracy of the NGVD 29. 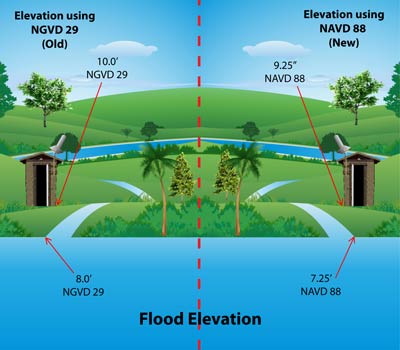 The use of the new datum, NAVD 88, will only affect river levels at this time. Vertical datums associated with lake levels and groundwater levels will be done at a later date.

Some more information about vertical datums may be found at the following links:

This is a cooperative effort between the Florida Division of Emergency Management, National Weather Service, United States Geological Survey and the District.