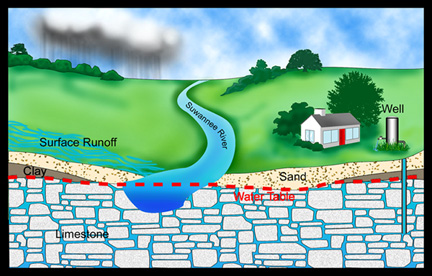 The potentiometric surface, or height of groundwater in feet using survey datum North American Vertical Datum of 1988 (NAVD 88), is measured in wells throughout the District.  Over 260 monitoring locations within the District are measured daily using telemetry.   The majority of the water levels are collected from wells completed in the Upper Floridan aquifer. Water levels are also collected from wells completed in the intermediate aquifer system (the eastern portion of the District) and the surficial aquifer system.

The District has three primary hydrogeologic units, in descending order: